Climate protesters blocked the M25 for the third time this week.

Essex Police, Surrey Police and Kent Police all confirmed they had responded to incidents on Friday morning, but all the affected roads have now reopened.

Footage from Essex showed officers have taken a tougher stance and swiftly made arrests.

Essex Police managed to stop 12 out of 20 protestors making it onto the carriageway, the group said.

The force confirmed 24 people were arrested, with officers able to “intervene and resolve the situation quickly, meaning the road was blocked for only several minutes” however, congestion lasted for approximately 45 minutes.

Superintendent Sam Smith said: “Incidents of this nature have the potential to cause significant disruption to road users, who may need to get to work, an appointment, or catch a flight.

“Our officers worked quickly to remove attempted protests this morning and made 24 arrests in a matter of minutes.

“The roads have now reopened and traffic is moving freely.

“I want to thank the drivers affected for their patience and understanding.”

Meanwhile, blue paint was also poured onto the road in a bid to disrupt traffic further.

The M25 anticlockwise sliproad at junction 9 was temporarily blocked, with two lanes of the motorway closed causing long tailbacks.

However, at 10.15am Surrey police reported both junction 1 of the M3 and junction 9 of the M25 had been cleared.

The force said 14 people were arrested on the M25.

Kent Police said 10 people were arrested where the B1273, in Swanley, and junction 3 of the M25 meet, but added “the road is now clear and traffic is moving”.

One protester, named only as Harry, a solar engineer from Cornwall said: “Although I actively chose a career in the renewable energy sector, I feel like I need to do more to prepare this country for the oncoming effects of climate change. I don’t believe the government is doing enough. I’m taking part in this action because I want the government to move faster on reducing CO2 emissions.”

Transport Secretary Grant Shapps said in a tweet: “This is dangerous and counterproductive. We all agree that climate change must be tackled, but this sort of behaviour achieves nothing, puts drivers at risk and INCREASES pollution.

“I expect the police to take swift action to clear the roads.”

Insulate Britain caused huge queues of traffic this week, with tens of thousands of drivers delayed after they blocked the roads on Monday and Wednesday during rush hour.

It comes hours after they were branded “selfish” and “dangerous” by the home secretary for causing chaos on the UK’s busiest motorway.

On Monday, police forces arrested 78 people, with a further 71 arrested on Wednesday.

To update, we have arrested 10 people at junction 1 of the M3, and the carriageway is clear. Junction 9 of the M25 is also clear.

Home Secretary Priti Patel said: “Peaceful protest is a cornerstone of our democracy and there will always be space for legitimate groups to make their voices heard.

“But this government will not stand by and allow a small minority of selfish protesters to cause significant disruption to the lives and livelihoods of the hard-working majority.

“The guerrilla tactics used by Insulate Britain detract from their cause and I know the public will agree that the scenes on the M25 this week were completely unacceptable. 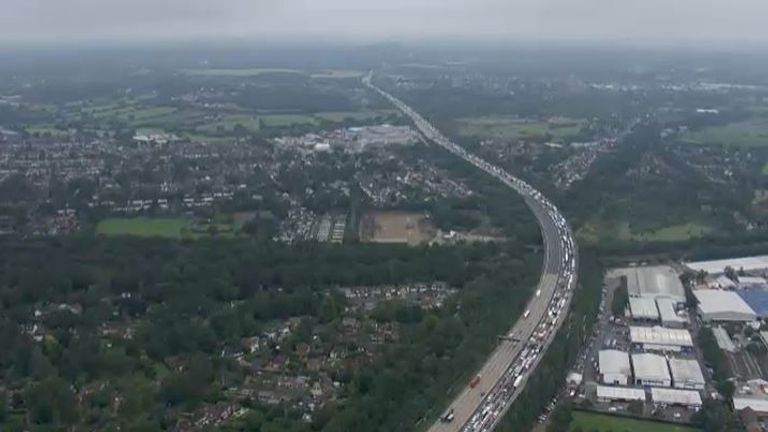 M25 at standstill after climate protest on Wednesday

“The police have our full support. They must uphold the law and take decisive action. This kind of disruption is dangerous and takes police away from communities where they are needed most.

“That’s exactly why we are giving police the powers to better manage such highly disruptive demonstrations in future.

“The Police, Crime, Sentencing and Courts Bill will introduce a new offence of public nuisance, ensuring there are appropriate sentences for the harm caused.”

On Wednesday, some protesters went as far as gluing themselves to the road to prevent police from being able to remove them.

Earlier this week, Business Secretary Kwasi Kwarteng said: “These actions are not only highly disruptive to those going to work and transporting vital goods, but are putting lives at risk on a busy motorway.

“Not to mention the resulting traffic delays will only add to vehicle emissions.”

Edmund King, president of motoring insurance group AA, added that a thermal insulation engineer was prevented from going to work after being stuck in the traffic queue during Wednesday’s blockade.

He said: “Whilst most people understand the need to take action on climate change, these motorway blockade tactics are just backfiring as they are alienating the working public stuck in this chaos and subsequently pumping out more emissions.”

Police say they are in possession of the bullet fired from the gun used by actor Alec Baldwin when he accidentally sho...

END_OF_DOCUMENT_TOKEN_TO_BE_REPLACED

Chelsea goalkeeper Kepa Arrizabalaga could still prove to be a massive part of Chelsea’s season and a real asset in their title pu...

END_OF_DOCUMENT_TOKEN_TO_BE_REPLACED

GOODNIGHT The Chelsea juggernaut just keeps on rolling - and not even wholesale changes, profligate attacking and a penalty shootout...

END_OF_DOCUMENT_TOKEN_TO_BE_REPLACED

Police in Bristol have launched an investigation after a man was raped in a park in the centre of the city.Avon and So...

END_OF_DOCUMENT_TOKEN_TO_BE_REPLACED

Rationalising why Mo Salah is ‘worth’ £400k per week contract

We’ve had world-class players before, but not of Salah’s level – and the alternative to giving him a new contract isn’t even worth...

END_OF_DOCUMENT_TOKEN_TO_BE_REPLACED

No further action will be taken over a banner unveiled by Crystal Palace fans protesting the takeover of Newcastle Uni...

END_OF_DOCUMENT_TOKEN_TO_BE_REPLACED

Chelsea title charge back on after confidence-boosting week – Talk Chelsea

Chelsea seem have their confidence back after a 4-0 win over Malmo in the Champions League, but the loss of two players to injury ...

END_OF_DOCUMENT_TOKEN_TO_BE_REPLACED

Two people - including a police officer - were injured after a dramatic chase involving a suspected stolen car ...

END_OF_DOCUMENT_TOKEN_TO_BE_REPLACED

City Ace Named Along With Five Chelsea Players In WhoScored.com’s Team Of The Week

Manchester City attacking midfielder Phil Foden has been named in WhoScored.com‘s Premier League Team of the Week. The 21-y...

END_OF_DOCUMENT_TOKEN_TO_BE_REPLACED

A job interview can be a daunting prospect at the best of times.But in a small town in Alabama, those applying to beco...

END_OF_DOCUMENT_TOKEN_TO_BE_REPLACED

Manchester United are consistently linked with French international, Ousmane Dembele, and we have another update coming from Sp...

END_OF_DOCUMENT_TOKEN_TO_BE_REPLACED

This is a huge week for Arteta’s Arsenal Football Club

Monday marks the return of Patrick Vieira to the club he spent nine years as a player, wore the captain’s armband, and lifted seven...